Fanfic / To Rule Them All: A Lord of the Rings ISOT 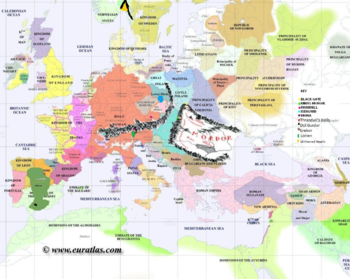 The Gates of Hell have opened.

To Rule Them All: A Lord of the Rings ISOT

is a The Lord of the Rings fanfic written by Severak, first appearing on AlternateHistoryDotCom, later being cross-posted to SpaceBattles here

. It is a reboot of a classic AH.com thread (found Here

). Unfortunately, that version of story was never completed, becoming a Dead Fic in 2012. Five years later, a writing challenge was posted on Alternate History to reboot the story, resulting in the new version, which was launched on March 12, 2017. That version was also declared a Dead Fic on July 25, 2019, after nearly a year without updating. Word of God claims that a Reboot is now in the works.

Said Reboot, subtitiled "Between Heaven and Hell", was launched on Christmas Day 2019, and can be read here

On January 25th, TA 3019, Gandalf and the Balrog stand at Durin's Tower, having fought each other for the previous 10 days. In canon, Gandalf slays the Balrog before dying himself (and later being revived). Here, however, the two combatants instead become so desperate to destroy each other that they release all of their powers as Maiar at once, causing several parts of Middle-earth (see the map) to be magically transported to Earth in January of 1200 AD, on the eve of the Fourth Crusade.

What follows is a War between Europe and the forces of Hell itself, with the fate of the world at stake.