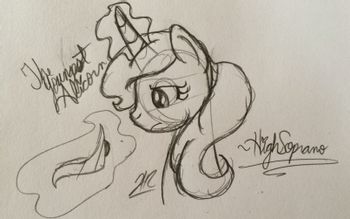 No Mary Sues to be found here!

Lily Note never really stuck out at High Hopes Orphanage. She was just a regular old unicorn. OR WAS SHE??

Yeah, turns out she's the first natural alicorn (that is, a pony born as an alicorn) in over 1000 years. As soon as Celestia and Luna heard about this, the younger sister decided to take Lily under her wing as her adopted daughter.

Lily Note is both anxious and elated about her new position. After all, is it not every filly's dream to be a princess? However, the gilded appearance of royalty is much more complicated than dancing at balls, living in luxury, wearing beautiful dresses, and getting what you want. It does not help that her adoptive mother and aunt are having issues of their own.

Story can be found here

The following tropes are associated with The Youngest Alicorn: