Fanfic / The Turning of the Screwball: The Strange Case of Button Stitch 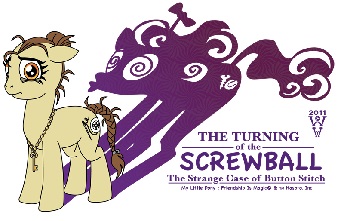 Everything was in perfect order. Then Discord happened…

The Turning of the Screwball: The Strange Case of Button Stitch

is a My Little Pony: Friendship Is Magic fanfic by Warren Hutch.

Button Stitch is an excessively regular mare with excessively regular habits, but something strange has begun to happen to her in the wake of Discord's rampage. Can Rarity and the rest of the girls get to the bottom of the strange manifestations of nonsense that have been plaguing Ponyville?

The author has written two sequels to the original story: Screwball Mio Amoré

Tropes in Screwball Over