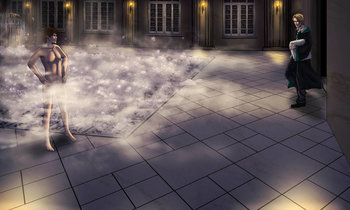 is a series of three Harry Potter fanfics by MystExplorer about two prefects who hate each other with a passion.

Prefects After Dark doubles as a Self-Insert Fic. The author, a self-proclaimed nudist, imagines what he would do if he were a prefect at Hogwarts.

Prefects Before Dawn picks up a year later. The antagonist from the first story becomes the protagonist as he tries to take the midnight bath he was denied a year earlier.

Prefects No More picks up after another year has gone by. One of the prefects has become Head Boy and the other is stuck in the state he was in at the end of the previous story.

The author later wrote a companion piece called The Other Prefects

. This story is about two prefects who get along very well (although one of them suffers a similar fate to the nudist prefect).

Finally, there is The New Prefect

, a follow-up to the trilogy set roughly a century later.

This fan fiction series contains examples of the following:

open/close all folders
The series as a whole
Prefects After Dark
Prefects Before Dawn
Advertisement:
Prefects No More
The Other Prefects
The New Prefect