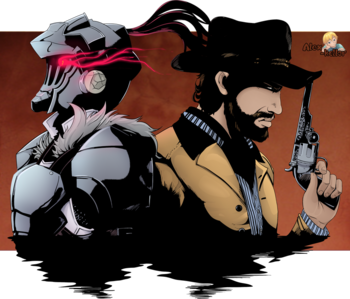 is a Fanfic by Mugiwara N0 Luffy

. It is a crossover between Goblin Slayer and Red Dead Redemption 2.

From the Description: "Arthur Morgan got his redemption at the end, or at least something that made it all worth it to him. But it seems God wants to give him another chance. Now, Arthur has to figure out if he really did learn from the sins of his past to help better a future for a world unknown."

It can be read

The Gunslinger contains examples of the following tropes: