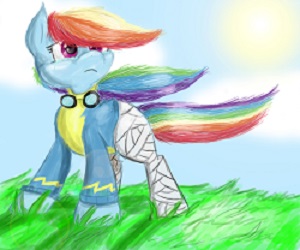 What do you do when you survive an experience so horrific, it changes your life forever?
In an alternate ending to Cupcakes, Rainbow Dash is saved from certain death at the hooves of the psychotic Pinkie Pie. However, she is left physically and mentally scarred by her experience, and must cope with what her onetime friend has done to her (and other ponies) and why. If she finds the answers she so desperately needs, maybe she can find a way to move on.

...Especially if she can no longer fly.

The Cupcake Chronicles is a My Little Pony: Friendship Is Magic fanfic by milesprower06 and can be found here

Tropes found in The Cupcake Chronicles: