"Wait a second." I said, eyeing my rescuers. "Zack, are you a Time Lord?"
He shrugged. 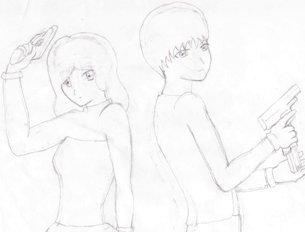 The California Contingency is an in-progress Self-Insert Fic detailing the story of two humans and their friend who might be a Time Lord on a quest to save the future. It's set in the Whoniverse, though no unoriginal characters occupy the main roles, and it drops the space-horror aspect of many of the canon stories for a straight-up adventure that occasionally verges on an Action Comedy. Can be found here.

Bored Ordinary High-School Student Meredith Foster finds her normal life shattered when an alien resembling a lump of Jell-O blasts its way into her classroom and takes her prisoner. She gives it a pseudonym in an effort to escape, but the fake name only makes matters worse, and she's knocked unconscious. Upon awakening, she finds herself imprisoned on an alien ship, only to be promptly rescued by two of her old friends from school - Zack Thompson and Dallas Kean. Things quickly get complicated when it's revealed that Zack is in possession of a working TARDIS and a sonic screwdriver, but he dodges all questions about his identity and plunges the three of them into 1911. They board the steamship S.S. California and set out to prevent the aliens, identified as the Helaran, from killing all of mankind. Along the way they meet Irene Norton and Jenny Plum, and the five of them work together to uncover a convoluted plot to brainwash humanity. Unfortunately, the Helaran aren't planning on giving up easily...