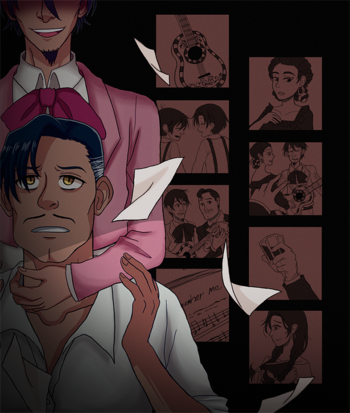 Mexico City, 1942. The bell falls but, instead of waking up in the Land of the Dead, Ernesto de la Cruz finds himself with a broken spine - and an unwanted guest at his bedside who claims he can let him have the sweet release of death, if he gives back what he took from him. And, in 1947, Coco receives a letter...
Advertisement:

is a fanfic based on Pixar's Coco. The story is an alternate universe where Ernesto de la Cruz is crippled instead of dying when the bell falls on him in 1942. Plagued with visions of a ghostly Héctor, Ernesto decides write a letter to Imelda, hoping to give her some closure so the ghost would leave him alone. Instead, he comes to face with an adult Coco Rivera searching for answers about her lost father...

Has a prequel story, named The Heaven and Earth Series and an alternate story based on the canon continuity named Down to Dust.

Tropes in The Bedside Ghost include: