Fanfic / The Adventures of Doctor Whooves 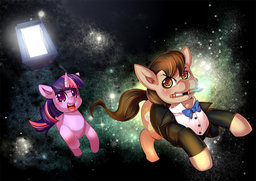 The 12th Doctor with his trustful companion, Twilight Sparkle
Advertisement:

The Adventures of Doctor Whooves

is a story done by Time Pony Victorious

and it's your basic Doctor Who and My Little Pony: Friendship Is Magic affair. The illustrious rogue Time Lord, the Doctor, falls into the My Little Pony universe after certain complications with his TARDIS and is thrown into a world of magic, miffed unicorns, and secret, evil plans. Though he may be a pony, the Doctor is more than eager enough to jump into adventure and save the universe, things never change, I suppose.

The series is in-progress with around 70+ chapters estimated for the first series alone.