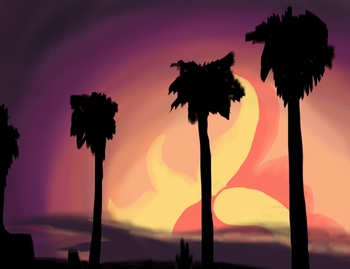 "So tell me Sunset Shimmer, what’s your story?”
"Look... when people keep being angry and hating each other... where does it end? I've seen it where it just keeps going and it's not right. Someone has to be bigger and just finally let it go and move on. The people at your school should of let it go, but they didn't... and your friends should of been real friends and stuck by you because they knew you changed... but they didn't because deep down, they couldn't let go either. That's their failing, not yours. No one can tell you who or what you are except you. And who you are is a good person Sunset Shimmer. I could see that even though we only hung out for like, an hour or so the day we met. So don't you ever let anyone else ever make you feel bad again, alright?"
— Jackie Vibrato

A My Little Pony: Friendship Is Magic fanfic written by GPizano.

The Anon-A-Miss incident is beyond control and despite figuring out the blogger's true identity, no one believes her, her friends have abandoned her, and Sunset Shimmer finds herself alone and at the mercy of the world until a stranger comes to her aid.

Even though she has only known this person for less than a day, Sunset Shimmer finds relief in her kindness and a solution in a bold suggestion. She decides to head west to Los Pegasus with her new acquaintance, finding a different way of life among a group of interesting people. Now that she is in a new place where no one knows her past or treats her with contempt... will she ever want to go back to Canterlot City?

The sequel, Ponies Go To Heaven, can be found here

The third story in the series, All Apologies, can be found here

The fourth and final story, What I Got, can be found here

A noncanon one-shot was written, titled Don't Hold It Against us, and can be found here