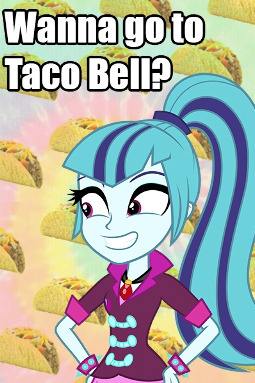 Taco Quest is an My Little Pony: Equestria Girls fanfiction written by MrAskAPirate. The story can be found here.

It's been barely two hours since the Battle of the Bands, and the Dazzlings are furious over the loss of their powers. In an attempt to cheer them up after she gets thrown out of their hideout, Sonata decides to go out for food after discovering a Special for free tacos, and later gets Pinkie Pie's willing assistance in this regard.

How much trouble can a magic-less Siren and one of Canterlot High's saviors possibly cause just by trying to get a snack at Taco Bell?