Fanfic / So, What Colour Is Your Toothbrush? 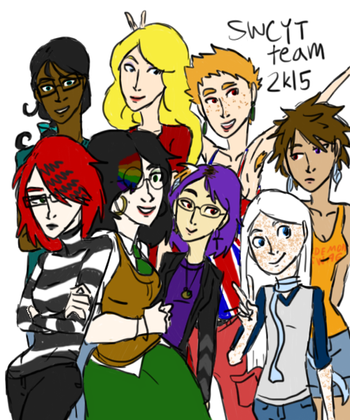 So, What Colour Is Your Toothbrush? (sometimes abbreviated SWCYT) is an MST/sporking theater featuring that can be clearly separated into two eras: the "old LiveJournal days"

, starting in early 2014 and ongoing, moving to swcytsporks

The format has remained similar for its entire run: a set of anthropomorphic animals (not furries), shown to the right in their human forms, occasionally joined by talking Pokémon and/or human guest sporkers. (Sometimes the actual author, Airey, will spork something, but those sporkings never involve the other characters.) The main team

's personalities all changed slightly somewhere in the gap between 2011 and 2014. They (referred to as "the cats" in the LJ era and "the (SWCYT) team" in the Turnabout Toothbrush era) are:

As for the Pokémon featured (by the main sporker's brother) during the old LiveJournal days: