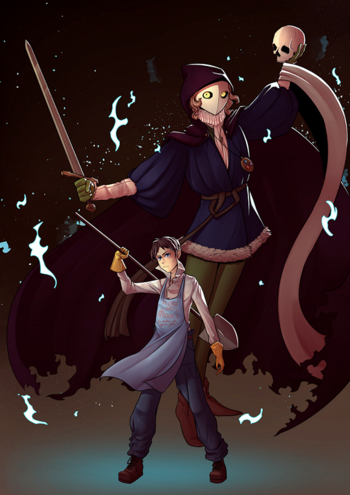 is a Fusion Fic between Neon Genesis Evangelion and Persona, from the same author as Destiny: Gospel of a New Genesis and Mobile Fighter Evangelion. The story can also be read on Fanfiction.net

, on Archive Of Our Own

Fifteen years ago, an event known as Second Impact triggered the spread of Angel Syndrome, a global outbreak of mass hysteria that's killed hundreds of millions of people. Mankind only survived by learning to utilize the power of Persona, in order to combat Angel Syndrome within the cognitive world.

In the present day, Shinji Ikari is summoned to Tokyo-3 and learns that he possesses the power of Evangelion, the one-in-a-billion ability to channel a Persona's power in the real world. Additionally, he finds that he can use multiple Personas with the seemingly-unprecedented power of the Wild Card. As Shinji discovers that not all is as it seems, he finds himself thrust into the center of ancient conflict.

As per usual, there are spoilers for numerous elements below. Proceed with caution if you have yet to read!

See Neon Genesis Evangelion and Persona for the tropes of those respective franchises.