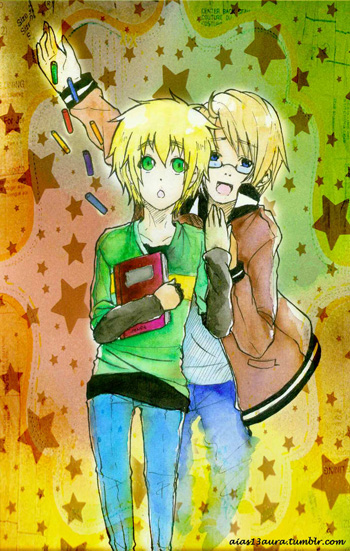 Just two friends having fun with each other
"If you throw someone a life preserver, and they turn around and swim away from it; what can you do but let them drown themselves?"

Seven Pieces of Chalk is an Hetalia: Axis Powers fanfic by Lady Charity on fanfiction.net. The fic opens with Arthur entering a new school and noticing that everyone is acting strangely. The halls are not like the typical American High School scenery. Students avoid each other. The whole place feels like it has been covered in a thick shroud. And it all seems to lead back to one Alfred F. Jones...

It is a lot darker than the original work and uses human versions of the anthropomorphized characters. But it is also very touching.

Tread lightly on this fic, it has some triggers.

The work can be found here