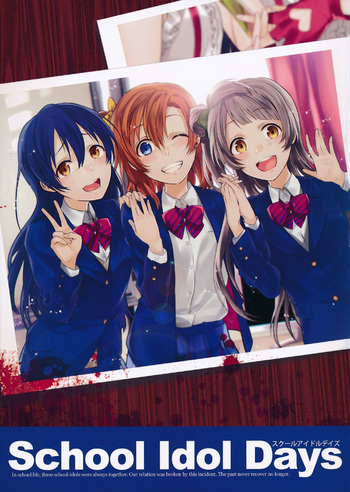 Three Childhood Friends are in love with each other. What could possibly go wrong?
Advertisement:

What If? the main characters of Love Live! were in a Love Triangle? Except one of them was homicidally/suicidally possessive?

is a doujinshi mini-series created in 2015 by Kyozip, based on the popular Love Live! franchise. As the name implies, the basis of the doujin is a Fusion Fic that combines the characters of Love Live! with the general plot of School Days. The doujin is infamous among the Love Live! community for its excessive brutality and generally terrifying overtones.

A sequel titled School Idol Days S, based on Love Live!'s own Sequel Series Love Live! Sunshine!!, was later released. Similar to the original, S uses some plot elements from School Days, but also borrows aspects and themes from Higurashi: When They Cry. It is loosely based on the events of Episode 10 from the anime's first season, where Riko gives Chika a Love Confession.

Incidentally, a series of official soundtracks for the anime was released under the title Notes of School idol days, which is in no way connected to this series despite the similar title.

School Idol Days has examples of: