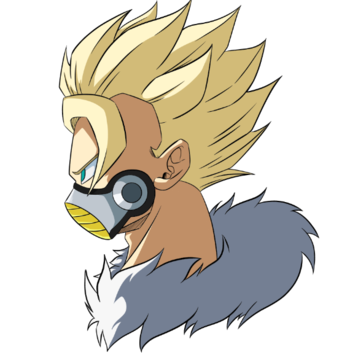 Time is a realm only a few people can alter on their own. If fate ever chooses you to learn it, then ask me again.
""I'm asking you to teach me the secret of time. We both know I was completely useless in the Tournament of Destroyers, and… and I need the power to archive my dream! I want to become what Frost was to the universe, only not a mask but a real deal, and I don't think that blue form may be enough, and your power would allow me..."
Advertisement:
— Cabba asking Hit for help, chapter 5

Sadala Chronicles: The Time Hitman: The fate of Frost's successor

it's a Alternate Universe Fic of Dragon Ball Super written by TrueUtopian. It's a sequel to The Saiyan and the Devil's Fruit.

After the arrest of the emperor of Universe 6, the Saiyans have seen a severe decline in their economy and reputation for aiding the infamous Frost; the remnants of Frost's army, the Space Pirates, started a war among themselves for the control of the forces. When the pirates hired the legendary assassin Hit to kill the opposing leaders on Planet Cinnam, this led a member of the Galactic Patrol to hire a Super Saiyan to arrest him: Cabba.

Cabba, however, had his own reasons for meeting Hit: to grow even stronger, and to learn the secret to the manipulation of time so the universe can have a new proper hero. During his mission though, he meets a mysterious individual that works as the Space Pirates's weapon manufacturer.

The Time Hitman provides examples of the following tropes: