Fanfic / Rise Of The Red Eclipse

"May the Force be with you, you son of a bitch."
— Grand Admiral Edward Nelson, Chapter 31 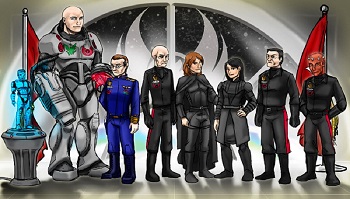 The Main Officer Cast as of Season 3
Advertisement:

Rise of the Red Eclipse

is a Star Wars fanfic In Name Only, as it takes place outside of the Star Wars galaxy with the main protagonists having left the constant wars of that galaxy behind. Written in an attempt to create science fiction in a science fantasy universe that actually adhered somewhat to the laws of physics and didn't fall into the pitfalls of scifi writing. Mainly a War Fic with drama and humor dashed in to help break up the monotony and help things not get so serious that they're cheesy, this literary work is meant mostly to show epic fights from one-on-one duels to planetary scale ground and orbital engagements.