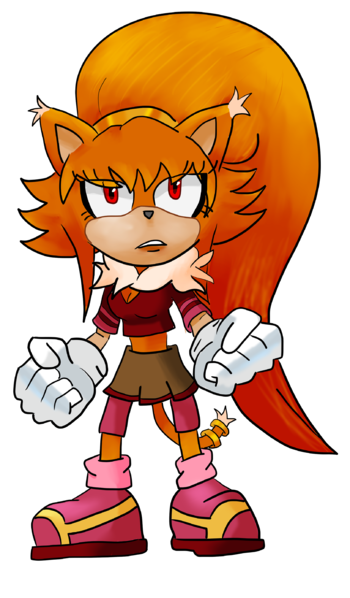 Bastette the Cat, a character endemic to the Resounding Echoes AU, and a member of Team Trove. Image courtesy of Monochromayhem, used with permission.

Seven chimes, call me back to the place before...

. Currently in its fourth part, it follows the story of the main protagonists throughout the franchise as well as a few new cast members. It is centered around darker themes such as grief and closure, but that doesn't mean it necessarily has a Downer Ending. It is a Sonic fanfic series after all!

It also deals with darker topics meant for an older audience, such as transitioning, guilt, trauma, and identity. Strongly LGBT, the AU derives its drama from many topics in the author’s own experience and the experiences of the people around them.

The AU can be found here

From The Heart, is complete.Part 2,

Fears of the Future, is now complete as well.Part 3,

Outside Looking In, is complete.Part 4,

Thy Vengeful Asymmetry, is currently in progress.