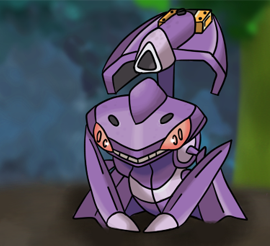 Don't you just hate it when you step outside and turn into a giant purple bug?
Advertisement:

is a Darker and Edgier take on Pokémon Black and White.

The premise of the story is painfully cliché, although it is handled in a fairly interesting manner. As it is not yet finished, the main plot is not completely clear. It is known that a genetic engineer by the name of Kelvin abducted a number of teenagers and had them turned into "Pokémon hybrids" (Involuntary Shapeshifters who transform into Legendary Pokémon at random times). He planned on using them as an army to take down Team Plasma, but was captured and imprisoned before he had the chance to even tell the hybrids what happened to them. It's eventually revealed that he intended to use the hybrids to avenge a former lover. While Kelvin was dealt with, his creations were left abandoned. Unbeknownst to N (who was on a research trip), Ghetsis took matters into his own hands by calling off all of Team Plasma's projects and instructing them to hunt down the missing hybrids. On top of delving into the struggles of several Pokémon hybrids and the Team Plasma grunts who are trying to capture them, the story also explores N's upbringing and ambitions, Ghetsis's motivations, the creation of Genesect, and what bonds humans and Pokémon truly share.

The story is told in third person, but each chapter follows one of six main characters: