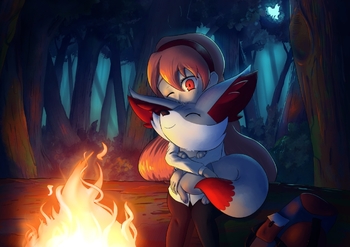 Outsiders is a The Familiar of Zero and Pokémon crossover fanfic written by trestwho.

When Louise Francoise le Blanc de la Vallière attempts to summon her familiar, she draws the attention of a powerful (and irritated) being: Arceus. Rather than allow one of his creations to be summoned by an impudent mage, he instead summons her to the Hall of Origin... and declares her unworthy. Not one to back down, Louise vows to prove herself worthy... and is given one year in the Pokémon world to do so.

. The beginning can be found on Sufficient Velocity

, though it has stopped updating on that site.