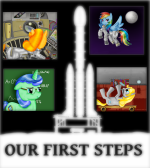 In a secluded desert, far away from prying eyes lies Equestria's most secretive facility. So secretive that even Equestria's government doesn't know what goes on there.

Welcome to Cape Coltaveral, headquarters of the Bureau of Atmospheric Experimentation and the topic of the My Little Pony: Friendship Is Magic Fanfic Our First Steps, written by Mrakoplaz. Where we follow the ponies behind Equestria's space program with the goal of launching a pony into orbit.

But a grand task like this never was easy and the staff and crew at Cape Coltaveral are in for a long struggle fighting setbacks and accidents to achive their dream.

Our First Steps provides examples of the following tropes: