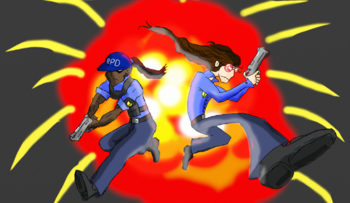 is a completed Worm fanfiction that takes place in an alternate reality that runs off Buddy Cop logic.

Our titular character, Officer Hess is a baddass ass kicker with anger issues. Officer Hebert is a sharp shooting hacker on the hunt for the truth.

Together they fight crime.

Naturally, they don’t get along with each other. As an affectionate parody, many of the tropes below are inherent to the genre.