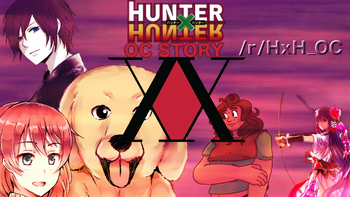 From left to right: Candy, Souma, Shen, Banda, and Kasumi
"Nature." The kids looked as though they discovered a new way of life, "No matter what, nature is always more powerful. So don't worry about the wind or the waves. Even the night owl shivers at the thought of them. Yet, the owl still continues to be strong and efficient. You might even say that it is only because the owl has nothing else to worry about that nature seems so scary. It is the only thing left to worry about for the shivering night owl."
—Arc 1 Chapter 13: Shivering Night Owl

The "OC Story" is an extended universe fanfiction of the manga and anime series, Hunter × Hunter. It is written by the Reddit user GuyWithSausageFinger, and originally posted to the subreddit r/HxH_OC. The story began as a writing exercise, where users would submit their own characters to be worked into an ongoing narrative, including input from the characters' creators as to their actions. It is currently ongoing, being in its third arc. The "OC" stands for "Original Character."

The story itself blends elements of several genres, similar to the canon material's own range of inspirations. These include elements of neo-noir, horror (psychological, slasher, surrealist, etc), political thriller, crime thriller, psychological thriller, action-adventure, comedy (including dark humor and surrealist humor), and, also like the canon, includes many concepts that could be considered sci-fi or fantasy. Some of these elements are due to the wide array of influences, spanning several mediums and many genres. Aside from the source material, the story is influenced by works of anime, manga, classic literature, movies (classic and contemporary), western television series, comics, music, video games, and real world historical events, including a plethora of references to works spanning the range of influences and similar properties.

The story is given a "mature" rating, due to its hyperviolent and brutal nature. There are instances of, or references to: drug use, dismemberment, child abuse, alcoholism, graphic depictions of "on-screen" death, Depression, War Crimes, and several other things that may be disturbing or emotionally unsettling. Sometimes when a chapter is linked on the main Hunter X Hunter subreddit, it comes with a "read at your own risk" warning.