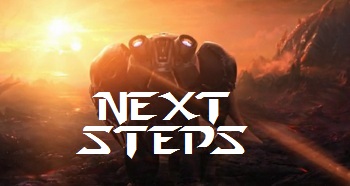 is a StarCraft fanfic written by Qwerty-man. It used to be called Next Steps. The story is set after the ending ofWings of Liberty, so beware spoilers.

The story follow the heroes(and villains) from the game after the battle of Char and succesfully deinfesting Kerrigan. Kerrigan struggles to cope with the situation and to atone her actions as the Queen of Blades, while Raynor continues his fight against the Terran Dominion, and tries to resume his relationship with Kerrigan and many of his crewmembers start to doubt about his leadership. Meanwhile, Mengsk is recovering from the mediatic injuries and plans a diabolical scheme to become the supreme Terran ruler of the sector.

The Protoss saw the Battle of Char and the deinfestation of Kerrigan as a golden chance to strike the now leaderless zergs and reconquer Aiur, but they will find that it's going to be harder than expected, while the far threat of the Dark Voice becomes more and more visible...