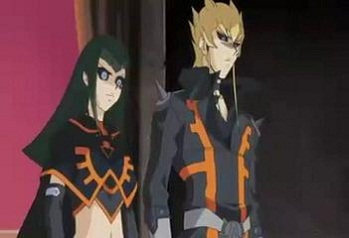 Rest for a moment. All will be explained in due time, my beloved. My...Dark King.
— Carly Nagisa
Advertisement:

My Dark King is a Yu-Gi-Oh! 5D's Alternate Universe Fic. It leads off from the halfway point of Jack's duel with Carly as a Dark Signer with one very simple question: "What if Jack had lost that duel, died, and fulfilled Carly's vision, becoming a Dark Signer?"

From that one change, events proceed drastically differently, mostly in ways that aren't very good. Yusei winds up not being around to help Aki in her duel with Misty and instead gets severely injured by a load of falling debris, Crow nearly gets his face beaten in by a Brainwashed and Crazy Aki, and then the King of the Underworld gets involved and everything just starts going straight to Hell. Literally! Suffice it to say, this is one fic that takes the already Darker and Edgier plot of the Dark Signer arc and ramps it straight Up to Eleven.

The story is currently being written by Masterdramon

. The story's greatest strengths are its familiarity with and respect towards the entirety of the Yu-Gi-Oh! canon, its expert ability to flesh out and develop minor characters, and juggling a lot of viewpoints at once, not to mention just being really damn well-written. The author is a lover of this site and a self-professed believer that TV Tropes Will Ruin Your Life , even going so far as to write a one-shot in gratitude to the troper, Lale, who wrote the first recommendation

It's worth noting that the author has also written three one-shots that fit neatly into the same "universe": The Devil and the Star

, a story about Takuma Saiou from Yu-Gi-Oh! GX founding the Arcadia Movement and how it was taken from him by Divine; Second Sun

, a story elaborating on Rex Goodwin's past; and Heroes of Justice

, a story about a young Sherry Leblanc meeting Edo Phoenix. The former two work perfectly well as standalones, not having to read "My Dark King" to really get them and not having to read them to get the main story, but "Heroes of Justice" at least pretty much requires having read "The Devil and the Star" first.

, a series of short drabbles featuring each of the original seven Dark Signers.