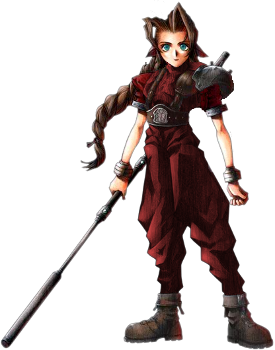 This about sums it up.
Mother's Legacy is a Final Fantasy VII fanfiction written by Drake Clawfang. The story focuses on a For Want of a Nail concept — Ifalna's escape attempt from Shinra fails, and while they arrive too late to save her from her fatal wounds, Shinra is able to track her down in Sector 7 and take Aerith back into custody before Elmyra arrives at the platform.

Flash forward to the timeframe of Crisis Core and Before Crisis. Aerith has been raised in Shinra as one of Hojo's experiments, and has now been placed in SOLDIER but with monitored movements, forbidden from leaving Shinra headquarters under any circumstances. Growing up in Sephiroth's shadow and constantly being ridiculed by Hojo for her inferiority in battle to him, Aerith is now cynical, jaded, snarky, and very bitter at Shinra. Her loyalties and skills are put to the test when Genesis vanishes in the aftermath of the Wutai War, and the anti-Shinra group AVALANCHE rises to challenge the company. Deprived of one of their best operatives and with an emergency giving Aerith the chance to show her skills in the field, she's released for field operations to take part in the new war between Shinra and AVALANCHE. Thus begins Aerith's journey to overcome her character flaws and prove herself to the world as she learns about the dark secrets of the company.

The fanfiction was declared a Dead Fic May 18th, 2015. It can be read here

This fic contains examples of the following: