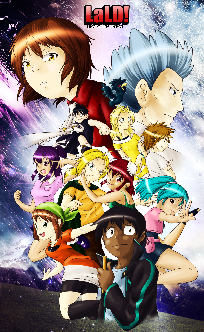 This is what happens when you write satire for Pokémon.

"The burning passions of a man can only be shown in battle..."

There was once a person who wanted to parody the "standard" of Pokémon fanfics. This series, is born from that odd dream.

This series is Like a Line Drive!, revolving around taking the common tropes associated with Pokémon fanfic series, and throwing it back at its audience for laughs.

Meet our protagonist, William. He starts his journey, entrusted with his trusty shiny Eevee known as Rydia. Together, they would face tough challenges, relying on each other's strength in tough situations. At least, that is what most people would think. ... In fact, he got dragged into starting this ridiculous and stereotypical journey, and reluctantly keeps up with his partner pokémon, who seems to have an unexplainable attraction to his person.

As his journey starts, William ends up with other pokémon, most of them having a color different to other pokémon of their race. Thinking it is strange, Will wants to find out more about his strange companions, slowly warming up to them. Starting to enjoy his adventure, he meets up with old friends, nasty villains, and strange people. Could it be that this pokémon hater is slowly turning to his old self? Can he stand up to the evil Team Galactic-Magma alliance, and destroy their disastrous plans?

The fanfic itself is known for its strange prose, as well as its plot points that at first seem completely useless, but later on become tied in with key elements that, promise to become much more prominent later on in the series.

, where the author also provides his user page with a small trope list.