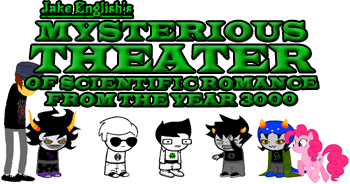 From left to right: Edrobot, Gamzee Makara, Dave Strider, Jake English, Karkat Vantas, Nepeta Leijon, Pinkie Pie. Not pictured: Caliborn, Kankri, Caius Ballad, Phelous, Lord English.
HOW CAN YOU THINK OF THAT MISRIBLE PILE OF LAMINATED THINKPAN EXCREMENT AS ANYTHING BUT AN ABOMINATION OF THE WRITTEN WORD?
— Karkat Vantas

Jake English's Mysterious Theater of Scientific Romance from the Year 3000 is an MST series written by Edrobot, centering around characters from Homestuck riffing really bad fanfiction. The twist is that Jake, canonically liking absolutely all movies, here likes absolutely all fanfics, and takes most of them a bit too seriously. Hilarity Ensues.

, on edrobot's blog. His tumblr is found here.

Works riffed so far include: