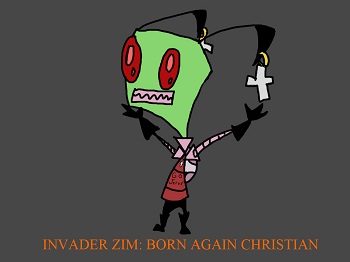 Fanart for the fic, by the author himself. Wrap your head around that one.

Invader Zim: Born Again Christian is the third story written by MarissaTheWriter, the author of the ITS MY LIFE! series.

It follows Gloria Deschanel, Zooey Deschanel's kid sister and a Christian, in the world of Invader Zim and Johnny the Homicidal Maniac. As she goes about, Zim is converted to Christianity, Gloria and "Nee" (who is also a Christian) make a couple and Dib finds a group named Teen Ragers, because the Swollen Eyeball Network simply won't help him.

Mere days after being published, it was MSTed by The Half-World, seeing as The Half-World partially contributed in it even happening. The MST has since been lost forever, but Skepkitty intends to republish it someday. There is also a dramatic reading, which begins here

, and another MST by Telltale Fanfic Theater 3000 here.