Fanfic / In All The Ways There Were 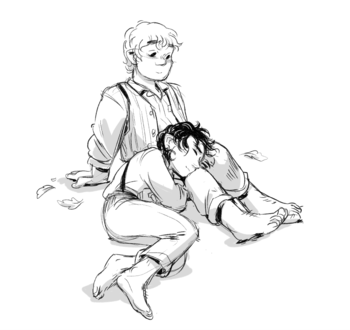 In All The Ways There Were is a Lord of the Rings fanfiction, written by Molly Ostertag. It is a retelling of the events of the LotR trilogy from Sam's point of view, centering his and Frodo's growing affections and romantic relationship.

It is a spiritual sequel to Molly's prior fancomic

depicting the two reuniting at Valinor, although the events are adapted differently in this fic.

It can be read on Archive of Our Own here

In All the Ways There Were provides examples of: