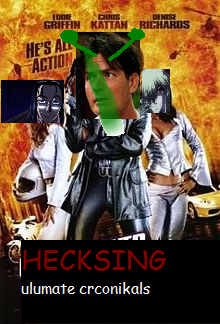 Yeah, it's a little like that.note Rip's to the left, Seras is to the right. Carl's in the center.
"Hm interesting i can use this broken hitrent as a boost for my tank witch Wil then make me abel to fly using rocket boosters so i can go to forrest and figt the vampers and live up to my organizaton name and UNLEESH HECK on the badguys of corse witch is why my last name is badguy aktualy it is not the reeson why but i do not rilly follow my family name i am aktualy a goodguy but for why im caled badguy is my family name; and i have bad past with my family who iis real badguy and gav me a badtime and showd he was badguy on me during the time i had in the past way back dering the past when i was kid but that aanother story taht I DONT WANT TO TALK ABOUT RIT NOW."
-Alucard, chapter 1.
Advertisement:

note While the "Ulumate" and "Crconikals" are "typoes" of "Ultimate" and "Chronicles," it is in fact supposed to be "Hecksing" instead of "Hellsing." is the third entry the Stylistic Suck SBIG series by Great Pikmin Fan and the first one longer than a one-shot to be completed. Unlike its other installments, this one actually follows the story of the original canon of Hellsing at first before slowly turning into an unusual adventure.

Alucard Badguy is a powerful vampire who kills other, evil vampires by the word of Integra Heck. Then, one fateful night during an attack of a forest, he ends up needing to do an Emergency Transformation to Seras Victoria. Finding out that the vampire who caused this was a part of a former co-organization Heavensing, Integra then sends Alucard and the newly vamperized Seras to "SERCH AND DESTROY TOES TRADERS." After a short battle, a spell that was keeping out all non-Hecksing or Heavensing vampires is broken with the death of Heavensing's leader... Ned Flanders (yes, you read that right), who got himself killed after Alucard killed his lover Father Alexander Anderson and he tried to avenge him (yes, you read that right too). With this spell broken, the mysterious Millennium are now free to wreek havok (or, rather, UNLEESH HECK [sic]) on the United Kingdoms of London. For most of the following chapters, Hecksing has to foil the various plans of the Millennium.

Also involved is a martian rockster Parody Stu, Carl, who's a blatant reference to Charlie Sheen/Charlie Harper, the Major crossdressing as a part of a Show Within a Show, a giant, mutant Homer Simpson, a giant, non-mutant David Hasselhoff, and Rip Van Winkle becoming an overly sexualized Ms. Fanservice.

A semi-sequel, Housestuck Hurrcain Crconikals, was released on the anniversary of HUC's first chapter. It takes place in the same universe as HUC, and focuses on the Homestuck characters, as well as elaborating a little more on the rest of the chapter 9 jury and the world in general. First through means of taking place in the same general timespan as the events of HUC, but as of the end of its fifth season, it's going to start going forewards past chapter 12. (13 being a Distant Finale.) There is also a sort of Crossover, Carl Stevens Universe, where the members of Hecksing who survived in HUC (Carl, Seras, Rip, and the Captain) get into a bit of a quarrel with the Crystal Gems. Another expansion came in the form of a prequel fic titled Hecksing: The Dawn, which aimed to bring more light to some of the members that didn't survive by virtue of taking place in the past. Dawn is more of a Monster of the Week format and composed of six chapters, and can be found here

. Until it gets the need to be split off on its own page, tropes for the Dawn will be listed here. Finally, there is Housestuck: The Split, a fan fic set on an alternate timeline that was created during the events of the time travel chapternote That's right, "the." Despite Homestuck's fondness for time travel and time loops, there is only on definite chapter on Hurrcain that focuses on time travel in Housestuck Hurrcain Crconikals. Split is aimed to answer a number of questions in other SBIG stories and, in general, serve as the Grand Finale for all of it, but due to Great Pikmin Fan wanting to wrap a few elements up first, it's slated for a distant 2017 release.

One year after ending Sweet Jade and Hella John, Pikmin Fan started a massive edit of about half of the SBIG installments. That has finished, and right now Fan plans to occasionally post the original versions of the chapters on the Fan Fiction Wiki. Its page there can be found here.