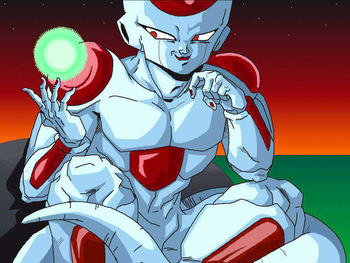 I was a normal man, in a normal world. Now I am Frost, son of King Cold. Will Frost be powerful enough to withstand the forces that would wish his end? Follow his adventures in the Dragon Ball universe.
—Fanfiction.Net summary

Written by marsolino on Questionable Questing, Frost is a Self-Insert Fic taking place in the world of Dragon Ball.

The plot revolves around a man from our world inserted into Dragon Ball Universe 7 as the OC second son of King Cold.

, and is mirrored for non-QQ.com members at Fanfiction.Net