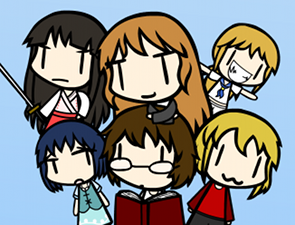 The cast of Love Hina, built out of parts from Touhou characters using Create.swf.note Because create.swf only allows one skin tone, Su is no longer tan.
Kitsune: One guy livin' with a buncha girls is a disaster waitin' to happen.
Keitaro: It's fine. I'm pretty sure I'll figure out where to go next. (I can't tell my sister I can't get the inn back, but maybe if I jump into the ocean, no one will find the body...)

Five Dangerous Months At The Hinata Inn is a Love Hina fan series by Spaztique and animated in create.swf. It retells the first three books of Love Hina with few changes to the actual plot, but with several twists on the original material: all of the Fanservice has been removed, most of its Slapstick violence is played for drama or dark comedy, and every subplot that's introduced later is introduced right at the beginning. Adding to this, Spaztique does not use the Love Hina soundtrack, but opts to make his own music. He also wrote the series without watching the original anime nor reading the manga, meaning the whole thing was recreated from memory.

The story thus far: Hyper-obsessive Ronin Keitaro Urashima has spent the last three years of his life abusing his health to get into Tokyo University to fulfill a fifteen-year-old Childhood Marriage Promise, which has essentially torn his family apart. When he's finally kicked out, he sets off to his grandma's inn, the Hinata Inn Hot Springs Resort, to gain control so he can both have a place to study for Tokyo U's entrance exam and fulfill his promise with his sister to run the inn together.

This fan animation provides examples of:

Keitaro: So, when do you think he's going to get back to this series?
Naru: It better be the moment he finishes that weird top-down shooter thing, or I'm flying all the way out just so I can strangle him until he starts up again!
Keitaro: ... I can get behind that.