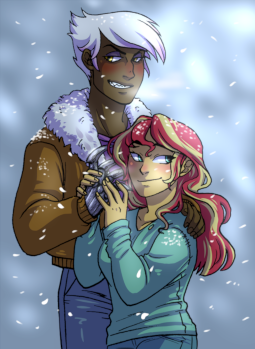 is a Equestria Girls fanfic set during the Holiday Special comic.

A bored delinquent and an exiled prodigy. When a MyStable profile called Anon-A-Miss sabotages all of Sunset's hard work and leaves her friendless Sunset finds herself exiled not just from Equestria, but from all of her social circles as well. Finding herself in the less walked corners of the school, she has a chance encounter with Gilda Grimfeather.

Rather than suffering under the imposing girl, Sunset and Gilda find themselves striking up an unusual friendship and more. Both outcasts, this is their story.

This fic does contain explicit sex scenes, but it isn't the main focus.