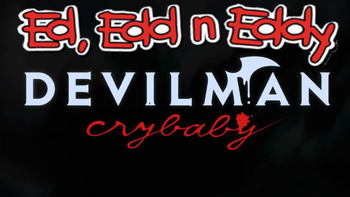 This oughtta be fun...
Advertisement:

Ed, Edd N Eddy / Devilman crybaby is a crossover between...well, what else? It is written by MasterOfNintendo, the same creator of the Review Team fanfiction series. The story can be read right about here.

When the Eds hastily dig a hole to escape an enraged Kevin's wrath after a scam goes wrong, they accidentally manage to dig themselves all the way to Tokyo, Japan. There, they meet Akira Fudo and get roped up in a world of blonde madmen, demons, blood, gore, and utter havoc. Are they ready for this world, but more importantly, is this world ready for the Eds?

This fic provides the following tropes: