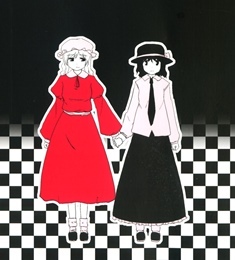 It's a dream
"If Gensokyo is a dream...then how can you say that you two aren't fantasy either?''"
—Rinnosuke Morichika
Advertisement:

Dream and Reality (Yume Utsutsu) is an illustrated book made by Iyokan and Surrounded By Enemies.

Renko invites Maribel to the abandoned Hakurei Shrine in the Outside World, but suddenly Maribel disappears. Renko is transported to Gensokyo, where after being nearly eaten by Rumia, she is saved by Marisa Kirisame. Now Renko has to find Maribel while finding out the secrets of Gensokyo.

Dream and Reality contains examples of the following tropes: