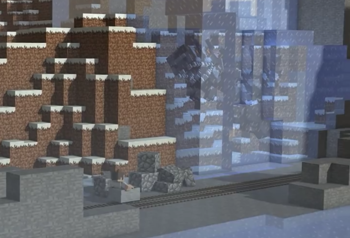 Yes. That is, in fact, a cow dinosaur.
Dig Build Live

. The series revolves around a world based on that of Minecraft, centering around the nameless protagonistnote Whose name is actually Tim, but that has only ever been mentioned once, and it was on name of the theme music. as he tries to become well versed in the world, all while having to deal with things like zombies, sarcastic skeletons, a surfer dude "mentor", Yiddish villagers... oh, and being kicked out of his house because the entire valley it was in was sold to a company of sorts, leaving our hero with no choice other than to venture in this brave new word that, trust us, is much, much larger in the worldbuilding sense than anything you would ever get out of your average Minecraft world.

But don't hold your breath! You see, the series, while never having uptated consistently and regularly,note Though at least they had an excuse on that, considering the series' animation is very high-end and they had to do it all by themselves. has been put on hiatus, with the last episode (not counting the occasional extras) being uploaded on February 2014.

Still, considering the series is only 7 episodes long, with none of them being longer than ten minutes, and also that many claim that it was one of the better Minecraft animated series out there, it'd be safe to say that it might still be worth checking out.

The series also has its own wiki

Oh, and, on an off note, don't be (too) alarmed by the small size of the trope page, the series is really short, there's just not all that much to talk about.