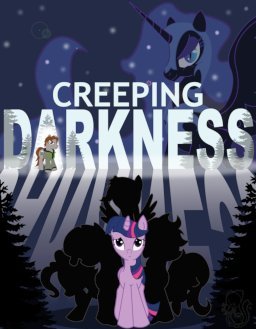 That's how you reshape destiny...
A cross-over fic between Alan Wake and My Little Pony: Friendship Is Magic.
Advertisement:

There is a shadow to all of existence, a place that all worlds are shielded from by a thin veil. A Dark Place, where a single presence plots and struggles to consume all creation with its darkness. The author Alan Wake is one who has defeated this Dark Presence, but to save his wife and his world Alan had to remain trapped in the darkness.

Now, through his struggles to return to his wife, Alan has unintentionally released the Darkness and an old villain upon Equestria. To fix the mistake, Alan starts a new story with Twilight Sparkle as the protagonist. Can the unicorn find the strength to face the darkness, or is all of Equestria doomed to be the victim in the dreadful horror story?

Can be read on Equestria Daily

. Can be enjoyed without actual knowledge of Alan Wake.