Fanfic / Call of the Moon

Satori: "If you cannot find value in yourself without the use of that sword, then what value have you got?" 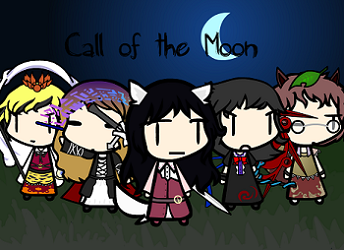 The cast. From the left: Shou, Byakuren, Okami, Nue, and Mamizou.

Call of the Moon is a Touhou fanfiction written by crystalgreatsword in the beginning of 2013.

It is centered around Okami Kobayashi, a unique wolf youkai, who possesses a family heirloom called the Crystal Great Sword. After living on her own for nearly 250 years, Okami was pondering the mysteries of her sword, when she heard a pair of lost travelers. Following them to make sure they got to their destination safely, She was entranced by the Sutra reading given by the head monk, Byakuren Hijiri. After the reading, she approached the monk, asking for help discovering the sword's powers, a quest that would reveal the swords checkered past, along with Okami's own powers.

Part of the Trilogy of the Moon series, consisting of:

-Call of the Moon

-Requiem of the Moon

-Origins of the Moon

Tropes in Call of the Moon