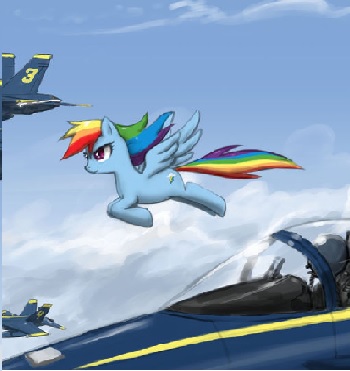 Most pictures are worth a thousand words. According to V-Pony, this one is worth 770k and counting.''
Blue Angel

is a My Little Pony: Friendship Is Magic fanfic written by V-Pony

Brand new Blue Angels pilot Lt. Justin Volare of the US Navy crashes his F-18 during his first practice flight while chasing an unidentified flying object. He is saved at the last instant and transported to Ponyville, where his life is saved, but not without some major changes, including his very species.

Unable to return to Earth, the story follows Volare as he makes a life for himself in the magical land of Equestria, forming friendships, a family, and even a Love Triangle along the way. It's not all sunshine and rainbows for Volare, however, as mysterious forces are conspiring to capture and use him for their own ends.

Clocking in at nearly 70 chapters and counting, Blue Angel is one of the longest, most prolific Fan Fics to appear on FimFiction.