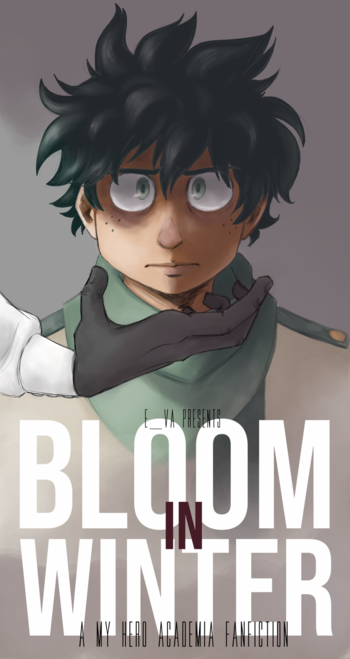 Cover by nerdismysafespace-01 on tumblr.

is a My Hero Academia Fanfic.

He doesn't have time to concern himself with that though, these days he's too focused on staying alive to think too much about what he can never have.

Then All Might takes a job teaching at U.A., and the universe says, "Hey you know what would be fun? What if we fucked Izuku over even more than we already have?" Thus, Izuku ends up in the U.A. General Education class with strict instructions to report everything he can, because, thank fucking no one, he just can't catch a goddamn break.

AKA Hisashi Midoriya is a member of one of the most notorious underground supervillain organizations, and Izuku is being forced to help them (even though, trust him, he'd really rather not). Too bad that they don't predict that Izuku's going to get adopted by half the faculty when they send him to spy on the prestigious hero academy.

Bloom in Winter provides examples of: