Fanfic / Believe in the Weird and Wild 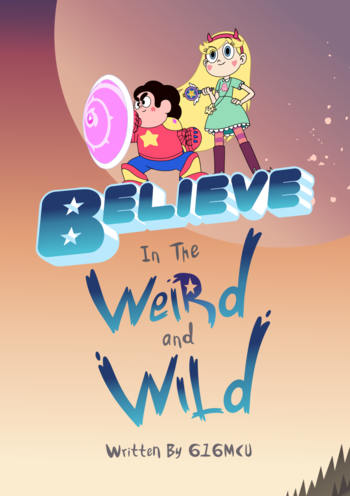 May the stars shine down on these two, for they have a long road ahead.Credit Cover created by MariusWales

Believe in the Weird and Wild

is a Steven Universe/Star vs. the Forces of Evil crossover fanfiction written by MCU616.

Instead of being raised by the Crystal Gems, Steven was found on Mewni as a baby by Star Butterfly. After he protected her from a monster, the two started to form a bond and he was later adopted by the Butterfly family, given the name "Quartz Universe Butterfly". After Star's 14th birthday, she was sent to Earth to get a better grip on her powers while Quartz stayed on Mewni, frequently making visits to his sister. Between fighting monsters and making new friends, their special bond grows stronger as the secrets of Quartz's true heritage begin to come to light.

Believe in the Weird and Wild contain examples of: