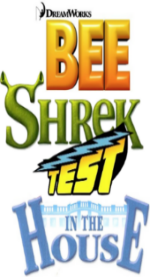 Once upon a time, there were four fellows who all wanted something more. One was a teenager who moved into the White House after his dad got a job there as a chef. One was a flame-haired 11-year-old whose genius sisters used him as a lab rat. One was an ogre who had many layers. And one was a college graduate bee who sued the pants off humanity for stealing his honey. If these four ever met, it would be the beginning of something wonderful...

There was one problem. None of them existed in the same universe.

Until the Internet got a hold of them...

Or, the comedic counterpart to Rise of the Brave Tangled Dragons. Also known as the New Big Four, Bee Shrek Test in the House is a crossover between Bee Movie, Shrek, Johnny Test, and Cory in the House, and is the swaggiest crossover ever to exist. It embraces internet and meme culture to its finest to make an anime beloved by many.

The series starts with the world in grave danger; the Internet must assemble a group of warriors to stop a plague known as The Big Four, whose incessant shipping fics and escapades risk destroying the universe as we know it. They enlist the help of Netlord, The Lord Of The Internet to help him find the right warriors.

Now, Netlord could have just chosen Shaggy Rogers and have been done with it, but the Netlord, angry with the internet for shitposting, anime, and Rule 34, decides to troll (read: exact revenge on) all of humanity by writing a shitty crosssover fanfic featuring Shrek, Barry B. Benson, Johnny Test, and Cory Baxter. Unfortunately for the Netlord, the fanfic turns out to be a great success, turning into the swaggiest crossover ever since Felix vs. Jerry.

And so the adventure begins...

Bee Shrek Test in the House provides examples of: