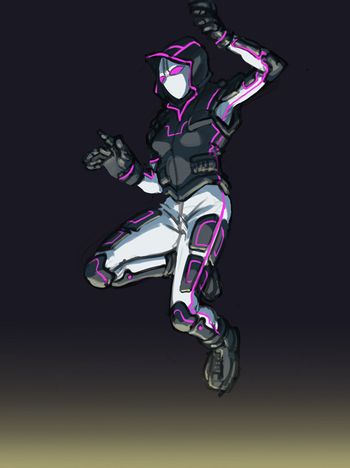 "Long is the way, and hard, that out of Hell leads up to the light."
Tether by Holocene
"She's dead."
The words felt alien, wrong somehow even as I spoke them. Two words. That was all it took. That wasn't right. There had to be more to it. A human life was gone. Gone. It was never coming back. She was never coming back. It had to take more than two words to erase someone's life.
Why wasn't that a rule? Why wasn't there a rule somewhere that said that when someone died, you had to use more than two words to express that fact? There just... there had to be more to it. There had to be. People died, and everyone else just... kept going. The world turned, the sun went up and down, and everything kept going.
I felt something vile rise in the back of my throat, burning a bit as I closed my hand over my mouth. I turned my head to cough sharply, feeling the stinging tears at my own eyes. God. Oh god, please. Please don't let this be real. I didn't mean it. I didn't mean any of it. I'll take it back. I'll do something better this time. Fix it. Please fix it.
Advertisement:

Atonement is a Worm Alternate Universe For Want of a Nail fanfic by Cerulean.

In an Alternate Universe of Worm, the locker prank goes a little too far, and Taylor dies from a heart attack. Wracked with guilt, Madison falls out with Sophia and Emma, and triggers with Mind over Matter powers and a Danger Sense. Calling herself Tether, she sets out as an independent hero before ultimately joining the Wards, determined to make up for her past mistakes.

As Atonement is a fast-moving fanfiction with a lot of content and plenty of Shocking Moments, most, if not all spoilers below are unmarked. You Have Been Warned.

Atonement can be found SpaceBattles

The Author also has a second fanfic in an Alternate Universe of the setting with a similar theme called Intrepid.

open/close all folders
A-C
D-F
G-I
Advertisement:
J-L
M-O
P-R
S-U
V-Z
“We...” I leaned back a little, moving a hand to Emma's chin, tilting it up so that she had to look at me. Her eyes were bloodshot, and she flinched but didn't look away once I caught her gaze. “We remember that... it wasn't some supernatural thing that made us act that way, Emma. We weren't taken over by some evil spirit or monster that forced us to do those things. They were our choices. Everything we did, we did it because we chose to.” She flinched and tried to duck her gaze again, but I held her chin steady. “Everything that happened, all of it, was our choice. And everything that happens in the future is our choice too, Emma. If you don't want to be that person again, then don't be her. It's all up to you. If you don't want to forget, then don't. Choose to be the better person. It's was your choice to be the person who did those things, and it's your choice to be a better one. You have to accept that... responsibility. Not just now, but all the time. You've gotta make that choice every single day.”