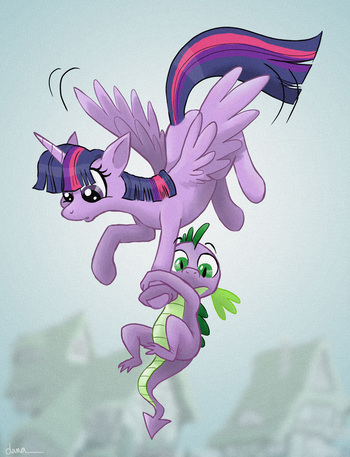 is a My Little Pony: Friendship is Magic fan fiction story by xTSGx

that was first published October 17, 2012, mere months before Magical Mystery Cure would make Twilight an Alicorn in the show itself.

It is a comedic Slice of Life story that plays with the ever-popular "Twilight becomes an Alicorn" fan fiction plotline.

It has a more adventurous sequel, Regent

, that deals with Twilight's problems as she rules Equestria as princess while the Royal Sisters are on vacation. The sequel is currently on hiatus although xTSGx has indicated a desire to complete it.

Ascend and Regent provide examples of the following Tropes: