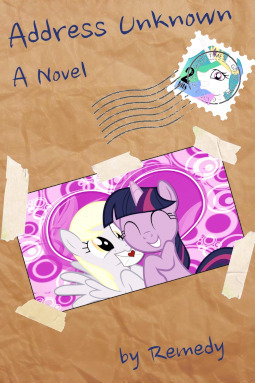 is a My Little Pony: Friendship Is Magic fanfic written by Remedy

and published on FIMFiction. It is a shipping fic, focused on Twilight Sparkle and Ditzy "Derpy" Doo.

Sometimes you just have a bad day. But for Derpy Hooves, it seems like every day gets worse than before. Her whole life she has been seen as nothing but a rolling disaster. She's seen as a clueless, quirky, messed up pony, simply due to her walleyed disability. How can she possibly hope to erase the stereotypes she was assigned? For Derpy, it's impossible. Impossible, that is, until she chances into a certain purple unicorn. Will this meeting be yet another failure, or could it be the opportunity she's been looking for to turn her world around?

As of a recent revision, the story now has two side chapters, Destination Known

, which contain the more mature stuff formerly found in the main story.