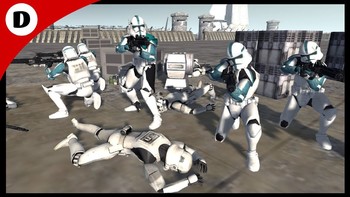 , with new episodes produced in seasons and released weekly. It takes place in a universe closely resembling, but distinct from (especially after the events of Revenge of the Sith) the Star Wars Universe The series is made using the Galaxy at War mod to the video game Men Of War: Assault Squad which allows Star Wars characters, vehicles, weapons, locations and more to be inserted into the game. Photographs and clips from the films and footage from other video games such as Star Wars: Battlefront and Empire at War have also been used in cinematics.

Each episode begins with a cinematic/cutscene that shows the characters, continues the established story, and introduces the battle of the episode. The rest of the episode is screen capture footage of a battle between two or more of the factions modded into the game. Though some episodes focus on smaller engagements, the majority include hundreds of combatants. Though the mod allows Daley to take control of any soldier or vehicle he wants, and even add and subtract soldiers and scenery, a main draw of the series is that he usually refrains from doing so unless necessary to continue the battle; a main draw of the series is the ability to see large scale battles between mostly AI controlled soldiers, with no outcome certain. But whatever outcome does occur, including the antagonist faction winning or main characters being wounded or dying will impact the story going forwards. Similar to a Let's Play, during battle segments of episodes, Daley will provide voice-over, recorded with the footage of the battle, both describing what is going on and often making jokes. Because the battles are uncertain, the length of episodes varies from under 20 minutes to over 40.

Rico's Brigade takes place in a universe that combines Star Wars canon, Star Wars Legends, and original, fan-fiction elements imagined by Daley. It follows the titular character of Rico, a clone trooper who, following the deaths of his entire squad, known as Daley Squad, began investigating the breeding of his clone "brothers" and soon discovered the terrible truth: Each clone was implanted with a bio-technological chip in their brain that when activated, would cause them to both kill anyone resembling a Jedi, and become mindlessly loyal to their superiors.

Rico's every attempt to warn his superiors of the obvious plot was foiled, due to Palpatine. Giving up, Rico instead used his natural charisma and intelligence to amass a following of roughly 1 billion open-minded clone commanders and their soldiers, and get them stationed in the Vergesso Asteroid Field, where they would have no contact with the rest of the galaxy, and could wait out whatever doom was quickly approaching the Republic.

At the end of the "Clone Wars," Order 66 was executed, the Jedi Order branded traitors and massacred, and Palpatine declared himself emperor of the Republic, now the Galactic Empire. Pockets of resistance sprung up, but none were able to gain any sort of foothold. But roughly two years after Order 66, a new hope emerged from the far corners of the galaxy; the military force known as Rico's Brigade.

As of November 2020, Rico's Brigade is currently wrapping up it's fourth season, the longest season yet, with over 25 episodes.