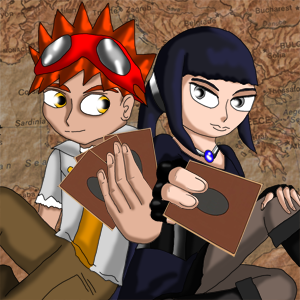 Solving problems with a card game a century before it was invented.

Yu-Gi-Oh! SP and Yu-Gi-Oh! SPZ are two fanfiction stories written by author Aarikku on the well-known card game forum Pojo, based on the Yu-Gi-Oh! card game moreso than the Anime or Manga, as it features none of the original characters, and is set in what is basically a version of our world... with more card games.

Yu-Gi-Oh! SP is set in the Victorian era, and features pro duelists Ray Ashford and Lilith Huron teaming up under the orders of Julian Nobel to collect a playset of extremely rare cards called Eldricytes. Hilarity Ensues.

Yu-Gi-Oh! SPZ is a sequel series set in the same Universe, about five years after the events of SP. It tells the story of Lance Lawrence, a bored Ridiculously Average Guy who works at a card shop and just wants to get some excitement into his life. He gets his wish when the Black Widow, a famous card thief, steals a valuable card from the shop. She challenges Lance to duel her at the end of the team-based World-Wide Grand Tournament.

SP is a short story of 10 chapters, while SPZ is updated weekly and is currently on its third arc. The author generally assumes that the reader is at least familiar with the rules and cards of the Yu-Gi-Oh! card game and only provides deep explanation on the effects of fan-made cards, so a potential non-Yu-Gi-Oh! familiar reader should get informed about the basic rules and real-life cards. If the reader gets past this, however, they'll be rewarded with a story full of self-depreciative humor and interesting characters.

Both stories can be read here

Note: Any spoilers up to and including SPZ Chapter 12 are unhidden.