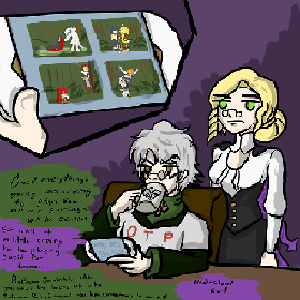 The fanart that inspired this fic. note By the artists sapphirebee

"Soon...Soon, all my pairings will become canon."
— Professor Ozpin

is a RWBY Crack Fic by General RTS. It outlines Professor Ozpin's attempts to ship his students together.

The following tropes can be found in Wizard Of Ships: