Fanfic / We're Gonna Get There Soon 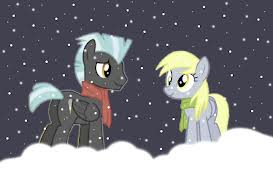 One snowy night changed everything...

A MLP:FiM Fanfic by Cranberry Muffin.

On the Ponyville Weather Team, a new policy is put into effect. Each meeting, somepony has to provide the snacks for the whole team, instead of just mooching off of whoever's house they're meeting at. This is a problem for Derpy, whose cooking skills are less than optimal. When the day comes for her to provide the snacks, it was the help of her close friend Thunderlane that allowed her to provide a tasty treat without any destroyed buildings. Thunderlane's kindness, and his admiration for her despite her shortcomings, pushed the two together, and they start their new life as Ponyville's new Odd Couple.

That was the prologue. Now, Derpy's been asked to present herself for Thunderlane's little brother's pony for family Appreciation Day, and it's up to her and her coltfriend to conquer her self-esteem issues and provide the best presentation ever.

, while the prologue can be found here

Unfortunately seems to be a Dead Fic, as its received no updates since 2013 and the author is nowhere to be found.